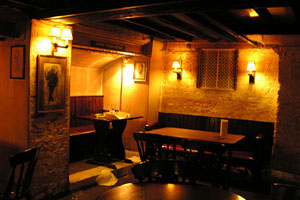 I went “walking” around London a few days ago via Google Maps Street View and I came across an interesting storefront about 1 mile west of St. Paul’s Cathedral. Funny thing is that I tried to revisit the location again just now and Street View doesn’t go down that street any more.

What first intrigued me about Chesire Cheese was its name and how it is situated under what appears to be an overpass in a very old building tucked away. A little Google action unlocked the door to a historic pub (not a cheese shop) dating back to 1538.

Charles Dickens was a frequent customer of this charmingly dark pub which served as inspiration for his novels. It’s said to be surprisingly large with various bars and rooms. Other literary figures associated with the pub are Oliver Goldsmith, Mark Twain, Alfred Tennyson and Sir Arthur Conan Doyle.

Chesire Cheese was rebuilt after the Great Fire of 1666. Some of the interior is believed to date back that far and at least to the 1800s. The vaulted ceilings are thought to date back to a 13th century Carmelite Monastery which previously occupied the space.

Thanks to wikipedia for all this info.

I think I found myself a pub to visit if I ever get back to London. All thanks to a leisurely walk through Google Maps Street View.

The New York Times’ positive review includes the following: “The beer is considered about the best value of any London pub.”

Frommer’s says, “The Cheshire is the best venue to introduce your children to an English pub.” So I’m sure it sounds a bit touristy, but that’s fine by me.

image courtesy of mya! on Flickr via Creative Commons license.

Very cool. I want to go and check it out in person. I say we leave the wife and kids at home while we make a trip to London for a guys style pub crawl throughout the city.