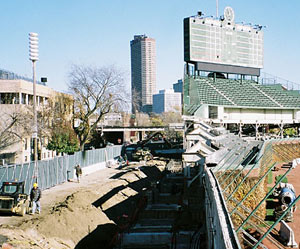 They are really tearing up the bleachers at Wrigley Field. Cubs.com has a “renovation gallery”. It looks like the only seats that are remaining is the upper section of the bleachers (right below the scoreboard). Everything else is gone! Don’t worry. The brick wall is kept in tact.

There’s no vendors walking around blocking your view.

Alcohol is not allowed in this section. So no stupid obnoxious fans.

They are called Bleachers, but they are not uncomfortable bleacher benches. They are traditional seats.

You can easily raz the opposing teams leftfielder. I still remember a game in the early 90s where my Dad was getting on Howard Johnson’s case (then with the dreaded Mets). We dug up some dirt on Hojo and my dad was razzing him before the game. Then we found out later that the dirt wasn’t on Hojo, rather another player. But it musta stuck in Hojo’s head cuz he bobbled a ball later in the game. E7! E7! We kept yelling at him. Classic.

Three rows of seats mean that you have a two in three chance of having comfortable seats. First row means you can lean on the outfield fence and get an completely unobstructed view of the field. Third row seats means that you can stand up at any time to watch the game action.

Only three rows of seats also creates prime territory to catch a homerun ball and batting practice balls. Only three rows of fans of fans to compete with. And since it’s a no-alcohol zone, you usually only have to compete with small, uncoordinated children. Plus, there’s a huge fence directly behind the third row, so balls bounce off th fence. Plus! there’s the basket where you can reach down and grab a baseball. We always talked about how we would jump into the basket if a ball landed there. Unfortunately, that never happened.

I have caught two baseballs in the Family Bleachers. The first one was a batting practice homerun ball that bounced off the fence and directly into my mitt. ALWAYS be conscious of the fence. The second one was when Jim Paquette threw me a ball. I said, “HEY PAC-MAN, THROW ME THE BALL”. He must like being called “Pac-Man” cuz he immediately turned around to see who said that and he threw me the ball.

My father, brother, and I had seats in the Family Bleachers when Sammy Sosa hit his 60th homerun, in 1998, over our heads onto Waveland Avenue. Sammy is complete idiot, but that was one of the best baseball experiences of my life. We also had seats in the Family Bleachers when the Cubs swept the doubleheader on 9/27/2003 against the Pirates to win the division title with only one game remaining in the season. That was unbelievable. If you watch the first game on ESPN classic or wherever, you will have a hard time seeing Mark Prior scoring a crucial run. That’s because you’ll see my hands waving in celebratory fashion instead. I’m part of Cubs history!

It’s sad to see the Family Bleachers leave us.