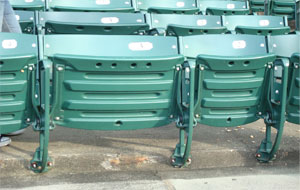 I have a solution for small market teams having difficulties filling seats. Put in wider seats; much wider seats. I love going to a ball game, but the horizontally-challenging nature of stadium seats doesn’t do much for comfort level, especially in our couch-loving society. I’m not saying to pull out stadium seats and put in couches (though that’d be pretty nice). Just make the stadium seats wider so we don’t have to play elbow hockey with our seat neighbors.

The first stadium to put in wider seats will experience a nice spike in sales. People will come to the game just to check out these new chairs. And they’ll keep coming back because it will completely change the ball park experience. “Comfort, spacey, roomy” will be new words introduced to the ball park seating vocabulary. People will love it.

Unfortunately such a concept makes terrible business sense in markets like Chicago, Boston and New York because tickets are in high demand. Small market teams should be all over wider stadium seats because it will make stadiums that normally look really empty look more full. Go back to that photo of the crowd at Braden’s perfect game. There’s just such large vast areas of emptiness. If they had wider seats, then the 12,228 people would have made those empty areas look much smaller, because the wider seats would have spread out the crowd.

Somebody’s gotta do this. Pittsburgh, Oakland, Kansas City, Miami, Tampa Bay, Baltimore, and Toronto, get you’re act in gear and put in some wider stadium seats!

1,500 pounds? No. I think that person needs an entire aisle to themselves.