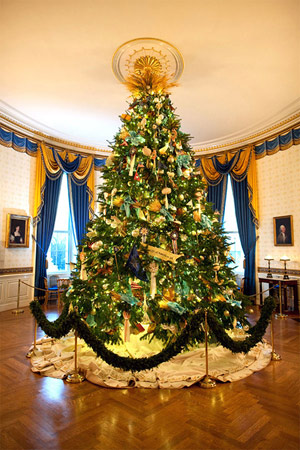 I really don’t like the barricade around the tree. How uninviting is that?

There appears to be some kind of glow under the tree. I like that. It’s mysterious.

The angle of the photograph is annoying. The circle treatment on the ceiling distracts from the top of the tree. In fact the entire ceiling looks very odd and gives a very strange sense of space. Chuck Kennedy really should have found himself a nice ladder and taken the photo from a higher vantage point and try to dig out a lens that’s not so wide.

Take a look at the hi-res sample on Flickr and you’ll see Chuck also did not use a tripod for the photo. It’s blurry! Another piece of evidence that he didn’t use a tripod is the very apparent representation of noise in the photo. When photographing a subject rich in detail, such as the White House Christmas tree, it’s best to grab a flippin’ tripod or at least a gorillapod and bump your ISO as low as possible so noise doesn’t strip out the great detail. ugh.

The stancions are there to keep the grubby paws of visitors off the tree. Believe me, they are infinitely better than the giant blue condom on the tree on the White House lawn