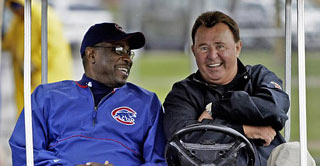 Fans have the opportunity to participate in the Ford C. Frick Award voting process. Select up to three candidates. The top three vote-getters will be placed on the final ballot for consideration for the 2006 Ford C. Frick Award, presented annually to a broadcaster for major contributions to the game of baseball.

Only one ballot a day will be allowed per voter. You have to give em your email address, but you may be able to get away with giving a bogus address. I dunno.

Here’s a list of the previous Frickin’ Frick Award winners.

Vote for Ron Santo. I can’t get enough of him talking about the eating habits of his cats. That’s baseball.

I’m also voting for Ron’s partner in the booth, Pat Hughes. And my third vote is going to Harmon Killebrew cuz he’s my favorite old-time player.

Whatever you do, don’t vote for Tim McCarver or Joe Morgan, especially Joe Morgan. I can’t stand him. pompous jerk!

I think i’m going to vote for BERT BLYLEVEN as well. He’s cool.

Steve Stone would be a good vote too.

It’s interesting to see the list of names. I didn’t know that Jim Kaat is still alive.

Tom Paciorek is doing TV for the Braves?

Steve Stone is my vote!!! He was, is and always will be the best.

I would also like to add Hawk and DJ to the list of people who shouldn’t receive a single vote due to their total lack of objectivity and horrible broadcasting skills. You can put em out of their misery…… YES!!!

I’ve been voting for Ron Santo every day and nobody else. What if the other people i voted for outvoted Santo? NO WAY MAN!

I wonder if they record the IP address as one visit. Because there could be a bunch of people at my company voting, but only one vote a day will count because of the IP address.

Or maybe it’s the email address that has to be unique? Or maybe the name?

Maybe I should just vote at home every day.

so it sucks that Santo did not make the list. Bill King, Dave Niehaus and Jacques Doucet did make the ballot.

It’s also rather funny that the baseball hall of fame calls me a “friend.” Wow, so friends like let each other into their home for free, right? So if i go to the hall of fame, I can just say “well i’m a friend of the hall, so let me in for free!” Maybe they’ll even make me a peanut butter and jelly sandwich!