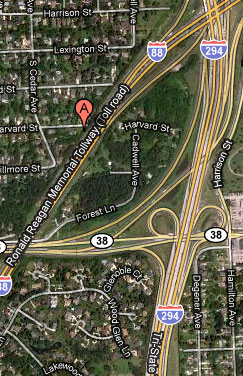 That very location exists. Interstate 88 is on the left with Interstate 294 on the right. Roosevelt Road (38) is at the bottom. The streets Harvard, Caldwell, Duncan and Forest make up this roughly three or four block neighborhood in what I’m guessing is part of Elmhurst, Illinois. And it certainly is one of the most unusual places to live in all of the Chicagoland area.

It could also be Hillside, Westchester, Oakbrook Terrace, or Oak Brook.

You should do a photo series of the houses and lifestyle in this area. That would be really cool. Take photos of the houses with all the expressways behind them.

I would not buy a house that backs up to one expressway. I wonder how the resale value of these houses are- in good times even. I almost have to go see this location in person. As Spudart says, pictures of his place could be interesting. I vote with Spudart that photos would be cool.

Ned and I are in united agreement. It’s official Moose, you have to take photos of this area. I expect a bound report by you. Preferrably bound using those plastic snap-on binders with the acetate clear covers.

Also the bound report in acetate clear cover and snap on binder should have a pie chart. All reports have pie charts.

I will most certainly make a trip to this region and take some photos. A future blog post will detail this experience.