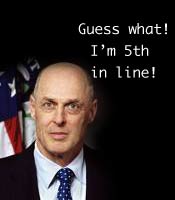 Curious to know who would become President of the United States if Bush and Cheney were knocked off? Most of you probably know it would be the Speaker of the House, Nancy Pelosi, and that President pro tempore of the Senate, Robert Byrd is next in line. But who’s after that and beyond? Below is a list of the Order of Presidential Succession:

* Speaker of the House Nancy Pelosi

* Secretary of the Treasury

* Secretary of the Interior

* Secretary of Health and Human Services

* Secretary of Housing and Urban Development

Curious about the order of the Cabinet positions, especially why Sec of Treasury is above Sec of Defense? The cabinet members are ordered in the line of succession according to the date their offices were established. Kinda lame if you ask me, but whatever.

well said, JA3. I was watching CSPAN a couple weeks ago and there was some sort of committee review that was asking questions to Senator Robert Byrd. There was some sort of of craziness happening during a vote for an agricultural bill and Sen. Byrd was improperly chewing out the person who collects the votes. I guess it was a pretty ugly scene. I don’t know much about Sen. Byrd, but he certainly seems like a cooky guy to me.