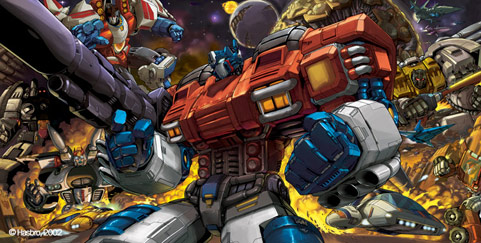 Last week, I posted about purchasing some Transformers toys. This post, I will cover some insights into one of the toys.

Toy 1: Transformers Titanium Series OPTIMUS PRIME vs. MEGATRON Exclusive 2-Pack Boxed Set
I never liked all the stupid versions of Optimus Prime since G1. They all pale in comparison to the G1 cartoon character. There’s something about the original G1 Optimus Prime that has made it an icon of my generation. With that said, the Galoob/MicroMachines Transformers RID (Robots In Disguise) Titanium 6″ die-cast Optimus Prime toy is freakin’ awesome.

Here’s some snapshots of the toy. They also have a complete review of the toy on that page as well. This version of Optimus Prime is actually from the comic book series, “Transformers: The War Within” which features Prime before he received the Matrix. Pretty slick. I’m gonna have to look into getting the comic book as well. It was published in 2002.

Megatron also came in this set. Here’s some great photos taken by Remy. He takes sharp photos of Transformers toys. I was never a fan of Megatron being a pistol (from G1), so I’m happy to see different alt modes for him. Megatron being a tank is a great idea. However, the tank form for this toy is lacking. It looks like Megatron just laying on his face to transform. Lame. The robot mode is alright. I’m happy to see the original Megatron head from G1 used here.

I have to agree with not liking the fact that Megatron was a pistol in alt mode. It was anti-climactic when he would transform into the gun and some other transformer (Starscream) would have to actually fire him because he couldn’t do it himself. Weak. Another thing that was odd about the transformers was that although they came from some other world (not Earth), they all took the form of some man-made object in alt mode such as a Semi-truck, a VW Beetle, a fighter jet, etc… Are we to believe that these objects came to exist in exactly the… Read more »

The transformers had different alt modes on Cybertron. In the cartoon series, the Transformers crashed on Earth and some little seeker bot went out and scanned different vehicles and such and assigned each Transformer a new alt mode. In the 2007 movie, the Transformers traveled to Earth in a comet alt form. When they landed, they transformed to robot mode and found vehicles and such which they scanned themselves and replicated for their new alt mode. The comets aren’t that apparent in the movie, but there are toys for sale that show certain transformers in their comet alt mode. Optimus… Read more »

That “little seeker bot” was being controlled by Teletraan I, the supercomputer on the ark. Funny that supercomputers come up, because next monday there will be a post on spudart.org about the world’s top seven supercomputers.

oooh! a spudart sneak peek exclusively via unlikelymoose.com! I love it!

Ok then, I obviously need to go back and rewatch all of the transformers cartoons.

However I thought the transformers came to earth via a ship (the Ark) which crashed into a volcano. Then the transformers were in a stasis for millions of years. And then reawakened when the volcano erupted and caused the computer to reactivate.

I was at Target the other day and found a funny toy that I almost purchased on the spot. It was a Mr. Potato Head coupled with Optimus Prime of the Transformers. They called him Optimash Prime, and you could dress him up to look like Prime.

It was great and reminded me of the Star Wars version of Mr. Potato Head called Darth Tater.

oh, you already mentioned his name was Optimash Prime. whoops.

That is what makes the Optimash Prime so funny. That fact that it totally does not work.

I thought they probably did the best they could in transforming Mr. Potato Head into Optimus Prime. Most things don’t translate well into potato form. But the toy was comical and kept to the wonderful tradition that is Mr. Potato Head. All this talk of Optimash Prime reminds me of the tie-in that M&M’s did with Star Wars a couple years ago. They introduced M&M’s with Star Wars wrappers depicting the M&M character guys as either a Jedi or as Darth Vader. I bought one of each and have held onto them, despite my wife’s constant pleas to open and… Read more »

they also have Christmas ornaments of the M&M characters dressed up as Star Wars characters. Classic. The worst one was the Chewbacca one, cuz it was just a hairy M&M. I was gonna blog about that. But I never got my hands on the Chewbacca M&M.