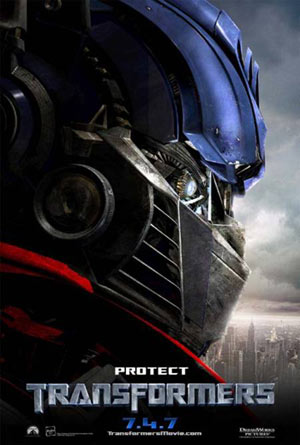 Overall, the movie was great. The action scenes drove this movie and there could have been more focus on that. It
s not that the non-action scenes were bad. They were actually well-made. It
s just that there was way too much coverage on humans. It should have been 95% robots and 5% humans. The movie wound up being 75% humans and 25% robots and that 25% is what made the movie great. I have my gripes with the movie because I’m a big G1 (Generation 1 from the mid 1980s) fan, but the movie had a nice pace to it and the cool factor was very high on the CGI.

WARNING: There is a plot spoiler later in this review. Consider yourself warned.

HUMAN CASTING
They did a great job casting all the humans except Voight and Turturro. Voight, John Keller Secretary of Defense, had a deer-in-headlights look about him the entire movie. And Turturro
s kooky character, Sector 7 Simmons, wasn
t kooky at all. It was forced and wound up being too vanilla and predictable for me. Sam’s parents were funny… for about 10 seconds. Then their act got kinda old.

The adolescent humor was fine. I understand they
re trying to appeal to the high school demographic. But they could have cut out half of the toilet humor and still appeal to that demographic. Overall, they did a great job with the humor. It wasn
t awkward like Batman 2 and 3.

WHICH TRANSFORMER WAS THAT ONE?
They had a good number of Transformers in the movie. There were about five on each side. Less than five on each side would have lost the spirit of the G1 Transformers. Too many more and the characters would have been completely lost. I was able to keep each character straight, but it was difficult at times. Others I have talked to said it was impossible to keep each Transformer straight. There
s three reasons for this:

2.) DESIGN OF TRANSFORMERS
I don
t think each Transformer looked distinct enough from one another. They all looked more similar than different. The Spawn-like detailing of the characters is the reason for this. I understand that more detail in the exposed gears and such makes for a more visually-jaw-dropping experience. But that value completely sacrifices the individual feel of each character. That
s unfortunate because the characters from G1 were well-developed and had great design features.

3.) TRANSFORMATION SPEED
They could have slowed down the transformation speed of Transformers from alt mode to robot mode when the Transformers were first introduced. I understand that they needed to make transformations speedy in certain scenes to keep up with the action. But when the autobots were being introduced it would have paid off to actually show how the parts move on each Transformer. My brother told me that the design of each part of each Transformer was accurate in terms of how they transform. Each part had a place. I didn’t see that watching the movie. Due to the speed of transformation, it appeared that they didn’t spend the time to actually figure out how each Transformer would actually Transform from alt mode to robot mode when they actually did invest that time. That’s a shame.

AUTOBOT CHARACTERS
What little time they spent developing the Transformers characters (at least the Autobots) were rich in content.

OPTIMUS PRIME (semi-truck)
Optimus Prime was well-represented complete with slick hero poses. It was great that Peter Cullen voiced Prime. Without Cullen, it would be like someone besides James Earl Jones voicing Darth Vader.

BUMBLEBEE
The movie invested a good deal of time in Bumblebee’s character which made him memorable. His character keeps the spirit of G1 Bumblebee alive and showed more depth. The 2007 version has more realness and attitude. I’ll never look at a Camaro the same way. Chevrolet must be the happiest manufacturer on the block right about now. I enjoyed the car dealer scene where they showed Bumblebee next to the yellow VW Beetle (Bumblebee’s alt mode in G1). Bernie Mac
s character tried selling Sam the Beetle. Then Bumblebee slammed his door into the Beetle. Good stuff.

IRONHIDE
Ironhide was better than G1 as well. The movie took his weapons specialist role from G1 and added a new angle to his personality by having him jokingly wanting to shoot the humans and the taco bell dog. I would have liked to see more of Ironhide.

RATCHET AND JAZZ
Ratchet (ambulance) was basically non-existent (which is similiar to G1). Jazz (Pontiac Solstice) was underrepresented. He had a nice funk-feel in G1 and we saw that only once in the movie (when he jumped on the car to sit down).

DECEPTICON CHARACTERS
FRENZY (boombox and cell phone)
Frenzy had a whimsical charm that made him a joy to watch throughout the movie.

STARSCREAM (figther jet)
I was very disappointed in Starscream. He was a pompous, arrogant, loudmouth in G1. None of that translated to the movie. He had maybe two lines in the movie and they were boring. At the very least they could have used Starscream’s original, annoying voice for those two lines.

THE OTHERS
They tried to represent Barricade, Bonecrusher, Blackout, Scorponok, and Brawl as strong-slient types. But I would have liked to see more personality from those big thugs. Those Decepticons were silent because the scriptwriters wanted to build up the plot of the humans trying to figure out what “technology” was attacking them. They could have done without that entire portion of the movie. Just have the Transformers appear; introduce themselves; and have the humans react in terror. I didn’t care to watch Jon Voight walking around the Pentagon aimlessly trying to figure out what nation attacked U.S. troops. They sacrificed the development of the Transformers characters and the action scenes for this silly plot line. Any ways.

DON’T FORGET ABOUT MEGATRON
Megatron had a nice prescense to him even though he didn’t make his full entrance until the end of the movie. I like his line about sparing Sam’s life to make Sam his pet. Though I have a big problem with the demise of Megatron.

WARNING PLOT SPOILER
MISTREATMENT OF MEGATRON
Outside the balance of human to Transformer coverage, my biggest gripe is how the humans put Megatron on his deathbed. That
s just wrong. Megatron can
t be brought down by human force.

The fight scene between Prime and Megatron should have last much longer with Prime destroying Megatron (which would have been great justification for Megatron killing Prime in the G1 movie). It was nice how they pulled Prime’s quote from the G1 movie,
one shall stand and one shall fall
, but they didn
t even show Prime saying it. They showed Sam. Lame. And the fight lasted for maybe 10 seconds after Prime said that. Lame. That
s when the real fight should have just started.

TOP NOTCH BATTLE SCENES
The action scenes were unbelievable. That
s what made this movie memorable. My favorite is when Prime pulled out his sword and stabbed Bonecrusher in the head. Stunning stuff. There should have been more action scenes. I was thrilled to see Bumblebee and Barricade fight. I was itching to see an Autobot-Decepticon face-off. Then we didn
t see another Autobot-Decepticon fight until the final scene of the movie. And that final scene was the most action-packed scene in any movie I have every seen. Period. I’m looking forward to the potential sequel. They completed the introduction of the Transformers on Earth in the first movie. The second movie should be have 35% character development of the Autobots and Decepticons and 65% action scenes and no humans (yea, right). I can’t wait.