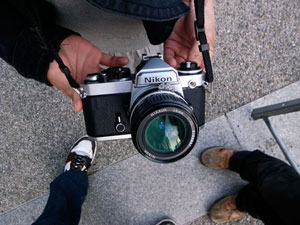 The Japanese, oh the Japanese. There’s a tumblr blog where someone just walks around Toyko taking photos of people’s analog (non-digital) cameras. There’s 300+ photos and counting.

The image above is a Nikon FE. I’d say Nikon is the most common. Leica is perhaps second. Canon is right up there. Mamiya and Contax are well-represented. No sightings of a Petri 7s, yet. I don’t think there’s any Kodak cameras. The Japanese know better. I’d say the Nikon FM2 is the most represented camera.