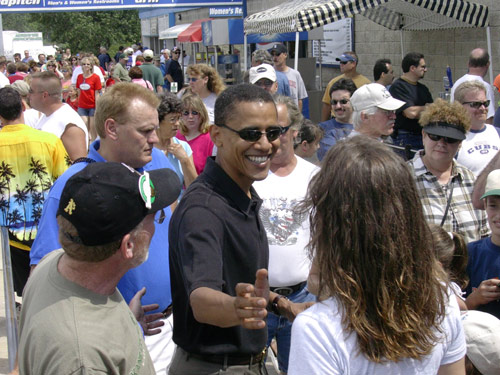 Today Barack Obama will be sworn in as the 44th President of the United States of America. I grew up in an America that showed little love for politics and its Presidents. That all changed when Barack Obama ran for President. He has electrified our nation in a way never remotely seen since the Kennedy administration. JFK. I’m a member of Generation X and JFK died 12 years before I was born. My generation only knows of inspiring Presidents through history books. Well now we are part of history.

I’ve been saving the following story for my blog for this very day, January 20, 2009. It’s a story I will never tire of telling.

August 24, 2004, Geneva, Illinois
My wife’s family and I were attending a Kane County Cougars baseball game. Before the game started, my brother-in-law, Chris, noticed a certain politician a few aisles down. It was Illinois State Senator Barack Obama. He was running for Senator of the United States.

I quickly jumped out of my chair to be a part of the action. There were no more than 6 or 7 people in the “crowd” including Obama and the Cougar security guard. Do I shake his hand or take photographs? Photography is in my nature so the decision was clear. I snapped away a few photos on my Sony DSC-P5 which can be viewed at my Flickr page (5 photos in all).

My moment’s encounter with Barack Obama had a deep impact. I returned to my seat and confidently said the following to my wife, “He’s going to be our next President.” There was just something very Presidential about him. If you doubt me, just ask Andrea. She remembers. This was State Senator Barack Obama. He wasn’t even a U.S. Senator yet. He was just another local Illinois politician… at the time.

Now it’s 4 1/2 years later and that State Senator is indeed our nation’s President. And he’s the very President that is inspiring my generation, our nation, and the world.

Outstanding! And I believe you!

I remember you telling me this story years ago. You predicted it!

What IS the numbering process? I don’t recall and I can’t seem to find it.

I think your facts are slightly skewed. The United States, as an entity, doesn’t elect Senators… U.S. Senators are delegates of individual states so Barry Obama was not likely the State Senator from Illinois at this time but a local politician running for state senator. That would make more sense to me. Still cool that you predicted his future destiny though. (Spudart is your brother, Matt – I figured out by seeing his meteorite photo)

Ikeman, thanks for your comment, but your information is incorrect. You said, at this time Obama was “a local politician running for state senator”. I believe you meant to say he was a local politician running for U.S. Senator. You also think I said Obama was a U.S. Senator at the time of these photos and I said that nowhere in the blog post. In August 2004 (when my photographs were taken) Barack Obama was a State Senator for Illinois’s 13th District. He was also running for United States Senate. State Senator means you represent a state district in your… Read more »