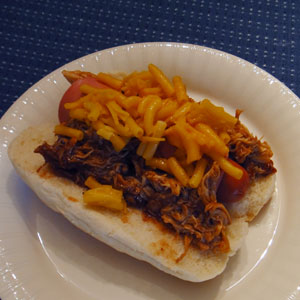 The True Chicago Hot Dog’s toppings are meat, more meat, and at least one cheese. After all, Chicago was the meat packing capital of the world. It is still debatable if the cheese is a necessary ingredient.

The example shown above was consumed on June 21, 2010. It is a turkey dog wrapped in american cheese wrapped in bologna with shredded barbecue chicken with macaroni and cheese on top.

The True Chicago Dot Dog is an off-shoot of the Elmhurst Dog which I invented in February 2008 which is a turkey dog wrapped in american cheese nestled in a white bun with BBQ pork. The True Chicago Hot Dog doesn’t have to have BBQ Pork or american cheese. It only needs two meat toppings and at least one cheese topping.

yea, it was pretty good. Though the BBQ kinda overpowered everything else in the sandwich. I’d really like to try another True Chicago Hot Dog with a different meat. It could be something as simple as wrapping the dog in bologna, ham, and american cheese. Now that sounds good.

You should try some of the hot dogs at America’s dog. They have all differnent styles of toppings, each design is named after a city.

The only thing that their hot dogs are way too thick and juicy. And their veggie dogs are the opposite, very bland.

If it weren’t for their lackluster hot dog meat, I would try every city at America’s Dog.

yea, i’m not a fan of super greasy hot dogs. I much prefer turkey dogs. I’m hoping that Wrigley Filed has changed their hot dogs with the new ownership. I love getting a hot dog at the game, but they don’t sit well in my stomach.

Can someone tell me what is so wrong with putting ketchup on a hotdog? It even made a line in a Dirty Hairy movie that ‘no one puts ketchup on the hot dog.’ I was watching a show called best of Chicago where they went to hot dog places too and the people there said that is is bad to put ketchup on a hot dog. Me, I love the ketchup. Anyone know why?