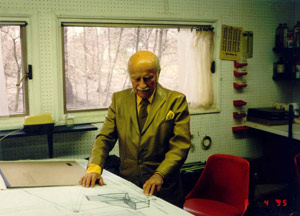 I’ve professed my love for Google Images countless times on this blog. I was curious what images would show up for “Chicago design”. There was one image that clearly stood out on the results page.

It is an image of Henry P Glass. (The image above isn’t the actual image, but I like the photo of Glass above better.) I never heard of the man, but now I’m glad I do now. Thisarticle at IDSA’s website chronicles Glass’ life as a designer. Here’s my unfairly quick rundown taken from the article:

designed inflatable furniture in the 1930s

designed innovative production methods for plywood and Masonite furniture (Mr. and Mrs. Eames can thank him) in the 1940s (metal conservation times of WWII mind you)

designed and built his own solar home in 1947

designed a collapsible accordian-folding camper in 1960

studied at the Armour Institute of Technology under Laszlo Moholy-Nagy