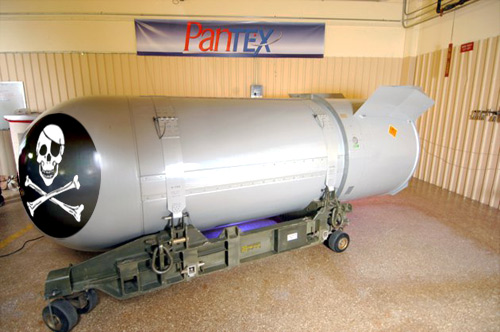 So, the United States is dismantling its biggest nuclear bomb. It’s “hundreds of times stronger than the bomb dropped on Hiroshima”. So then why does it look so incredibly boring and non-descript? I want flame graphics, lightning bolts, skulls and crossbones. Something! At least put some yellow and black stripes somewhere on this 10,000 pound beast. All we get is a tiny rotated yellow square towards the back.

I added the skull and crossbones to the front. Now we’re getting somewhere.

full news story from Yahoo
This undated handout photo provided by the National Nuclear Security Administration shows the United States’ last B53 nuclear bomb. The 10,000-pound bomb is scheduled to be dismantled Tuesday, Oct. 25, 2011 at the Pantex Plant just outside Amarillo, Texas. It
s a milestone in President Barack Obama’s efforts to reduce the number of nuclear weapons and their role in the U.S. (AP Photo/National Nuclear Security Administration)

there is no graphic on the bomb, cuz we are Americans. We are classy and don’t do stupid things. Wait. I got my countries mixed up. But a big AMERICA RULES AND THE REST OF THE WORLD SUCKS on it.

*note i do not endorse this statement. I like the world and think America needs to be a better country with everyone. Thank you. And good day.