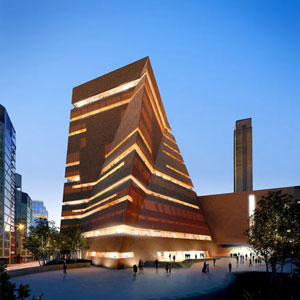 There’s a ton of great memories from my visit to London 4 years ago. One of which was our visit to the Tate Modern. It’s an enormous museum dedicated to modern and postmodern art, great art at that as well. It’s not your typical clich
collection of Andy Warhols.

I was shocked to see that they’re planning on building an extension to the Museum. The Tate Modern is in a refurbed factory building. They left half of the building empty with plans to fill it later. The second half can be easily viewed from any floor of the museum. It’s a simplistically brilliantly designed space and perhaps that’s why they decided to build an addition rather than fill that great open space.

praise for the extension:
guardian.co.uk
londonist.com

The Tate Modern was one of the highlights of my trip to London 2 years ago. I can still picture most of it in my head

We didn’t have time to see the Tate during my visit to London (did see the National Gallery and the British Museum though).

I don’t think it would have had the same effect on me though as you are obviously a much bigger fan of modern and post modern art than I am.