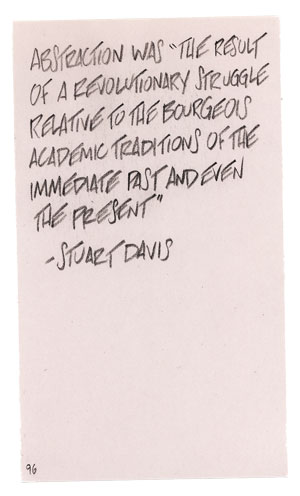 This quote appears in Pam Meecham’s essay, “Realism and modernism”, found in “Varieties of Modernism (Art of the Twentieth Century)” edited by Paul Wood. Published in 2004 by Yale University Press.

I googled the quote and there’s many results linking to Lenin’s “Preface to the Russian Translation of Karl Marx
s Letters to Dr. Kugelmann“.

Apparently Stuart Davis was a Marxist, but not a member of the Communist Party. John X. Christ, assistant professor in the Department of Cultural Studies at the University of Massachusetts Lowel, points out in his article, “Stuart Davis and the Politics of Experience“, that Davis didn’t share the Socialist (capital “S”) view that art should be “naturalistic” and “figurative with an overt sociopolitical message”. And he also mentions “Davis’s faith in the transformative and democratic potential of a shared understanding of the American scene”.

It’s just interesting to me how Davis injected Marxist terminology in his quote.