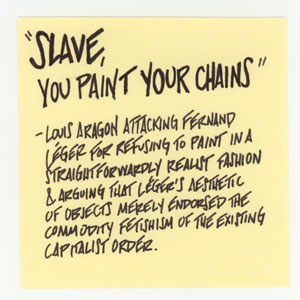 I love this quote from Louis Aragon. Time (and common sense) has proved that Aragon is on the wrong side of history, but the imagery he portrays with his quote is pure gold.

“Slave, you paint your chains”
-Louis Aragon attacking Fernand Leger for refusing to paint in a straightforwardly realist fashion and arguing that his (Leger’s) aesthetic of objects merely endorsed the commodity fetishism of the existing capitalist order.

Text from Emma Barker’s essay, “Art in Paris in the 1930s”, appearing in “Varieties of Modernism (Art of the Twentieth Century)” edited by Paul Wood. Published in 2004 by Yale University Press.

My rain i mean my brain is slow today. I don’t get it. The quote and the argument between Aragon and Leger.