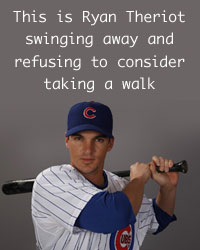 I’m glad the Cubs got rid of Ryan Theriot. I was never a fan. It was kinda cool when he first came up with Mike Fontenot and we learned that they were teammates at LSU. That was fun for, oh, about 2 days.

Sure he’s a scrappy player. But that act gets old quickly when the scrappy player is leading off and can’t draw any walks. Just look at Theriot’s 2010 stats the day he was traded: .284 avg (ok), .320 OBP (bad-70th in NL). He had only 19 in 388 at bats this season as a Cub. 118 other players in the NL have more walks than Theriot. ONE HUNDRED EIGHTEEN. That’s just for the National League. There’s only 16 teams in the National League. So, on average, there are 7.375 players on each National League team with more walks than former Cubs leadoff man, Ryan Theriot. And Theriot is 11th in at bats in the NL (388), so he
s had plenty of chances to draw walks, but he simply hasn
t.

97 of his 110 hits this season are singles. He has only 10 doubles. How about that .327 slugging? That
s only 7 points higher than his on base percentage. I expect a player in Theriot
s position to at least stretch more singles in doubles. But he clearly has not.

Being tied for 13th in SB in the NL with 16 doesn
t exactly make him a big base stealing threat either.

So what exactly is Theriot
s
game
? Basically what you
re getting in Theriot is a singles-only hitter who DOESN
T walk and is above average on the bases. You don
t want him anywhere near the top of your order. He
s a 7 or 8 hitter.

And Theriot will kill you defensively. There is no zip on his throws at all. None. Zero. Zilch. Null.

We all know how people like to make Theriot’s name into The Riot. Cute. But what about other anagrams for Theriot?

Tot Hire: They certainly hired a tot
Tit Hero: Girls like him.
Other It: He’s the other shortstop
I Hotter: Is he really?
The Trio: Not sure who the trio is.
Hi Otter: haha.
Eh I Trot: And this is the best one, because it shows his propensity to not draw walks.