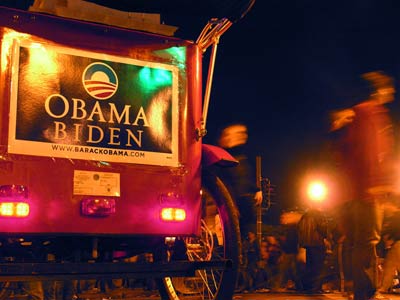 I like the sound of that… President-elect Barack Obama.

World history was made in Chicago on November 4, 2008 at Grant Park. And I was there for it. Barack Obama had just been elected President of the United States of America and he was making his acceptance speech at Grant Park.

I was among the crowd outside the “ticket holder” section of Grant Park. The wide range of people were impressive. Young and old, black and white, drunk and sober, sane and insane, smelly and really smelly were well-represented. Everyone I encountered was well-behaved and joyous, even the drunk college kids.

Seriously though; my entire life has been spent experiencing the terrible political effects of Richard Nixon’s Watergate. Cynicism reigned supreme which peaked under Bush 43’s administration which thrived on lies, fear and hate. Ronald Reagan and Bill Clinton charged their political base, but were unsuccessful at uniting our nation. They were polarizing figures. America desperately needed a presidential candidate to energize and unite our nation. No one could meet that challenge… until now.

Barack Obama is changing the civic attitude of our nation and I witnessed it firsthand last night. The crowd was a true slice of Chicago. I saw black, white, asian, hispanic, rich, poor, middle class, college students, and grade schoolers proudly holding their parents’ hands. It was impossible to determine a demographic majority. I witnessed no discouragement or any form of content for any political figure. The atmosphere was charged with celebration and pride not for a sports team or a fireworks display, but for the future leader of this nation. It was a cherished moment of American history.

The inspiration of Obama can be seen beyond our country’s borders. I’ve never seen so many nations share in our country’s excitement from news reports of people dancing in the streets to message board posts from French women stating that they cried in joy at the news of Obama’s election. Today, our world is filled with some much needed hope.

Attending this rally wasn’t for the intent of taking photographs. I only snapped a small handful which can be found on my flickr page. I simply wanted to express my strong support for President-elect Obama and be a part of world history.

My trusty Nikon 8800 camera, mini-television and headphones accompanied me on this trip. I listened to most of the speech at one of the Native American Warrior statues (the one on the north side) by Ivan Mestrovic at the intersection of East Congress Drive Plaza (just east of Michigan Ave) and Congress Parkway. The loud speakers were muffled, so I was fortunate to have my television to hear President-elect Obama’s words crisply. It was inspiring to hear his speech and have the ambiance of his words bouncing off the buildings on Michigan Ave.

I originally wasn’t planning on going downtown. I was looking forward to watching MSNBC at home throughout the night. I have been following this election pretty closely since the weeks leading up to the primaries. November 4th was a day I was looking forward to for a long time. Pennsylvania and Ohio went to Obama a lot faster than I thought. It was standard thought that McCain couldn’t afford to lose two swing states of Pensylvania and Ohio were members. So, I made the spur decision to hop on the 9:13 train and be a part of history. I didn’t… Read more »

I had plenty of reservations about both candidates in this election and I wasn’t sure who I was going to vote for until the very end. However, I did ultimately cast my vote for Obama and I sincerely hope he effects some needed change in this country. There is a lot of work to be done. 1) We need to change the culture o this country from that of entitlement and dependence to one of hard work and self sufficiency. 2) We need to fix our economy and not by bailing out the large corporations who made bad investments or… Read more »

Hippy hippy Sen Obama. I was born on the 4th of Aug black lady in Africa your strong fan since you started campaign. You made me proud and to know the sky ONLY the sky is the limit. Be blessed