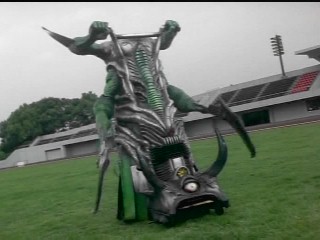 I feel blessed that I was not a child when the Power Rangers television program was popular. This site details all the silly monsters on the show. The best one i could find is the photo posted above. That is Lawnmower Org. Any sort of monster or robot that is associated with a lawnmower has to be cool on a certain level. But just gander at ANY of the other villians like Zelmoda, Bandra, or Squatt. (no links to specific characters. site was built using frames.) Terrible, terrible stuff.

To a point it’s funny cuz these things are sooooo stupid and soooo lame. But I would not want my childhood to be associated with such terrible characters. I am quite happy to come from the Transformers/G.I. Joe generation. thank you very much. Even Starscream and The Barrones were 50 times cooler than 98% of these Power Ranger villians. Did I just say that the Barrones was cool? That’s just about how bad Power Rangers are.