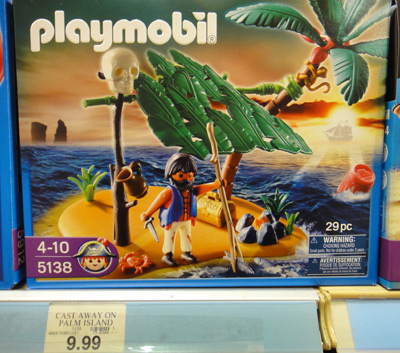 The narrative on the box design for Playmobil set 5138: Cast Away on Palm Island is intriguing. I want to know more about this story. This man seems to have been on this incredibly small island for some time. His clothes are tattered. He sports a deep tan.

He’s made the most of his existence. Leaves and vine from the single tree were used to construct his home. There’s also some form of vegetation that he maintains along with a few rocks. He’s equipped with a jar, knife, and whatever is inside that case behind him. What’s in that case?!

He’s able to spear fish. In fact he apparently has found a way to get the fish to jump up on his shore in addition to crab. I don’t understand how he doesn’t get swept up in the tide. Maybe this is high tide and the island is larger at low tide.

Getting off the island doesn’t seem to interest him because he’s ignoring that ship on the horizon. Most perplexing of all is the giant skull placed atop his dwelling.

He also apparently had a fellow castaway who didn’t quite make it! At least the person’s skull makes a nice finial on his awning!

Alas! There is the single key that unlocks all the mysteries of how this man is able to achieve so much on a tiny deserted island. Up in the tree is a monkey!

whoa! I did NOT see that monkey.