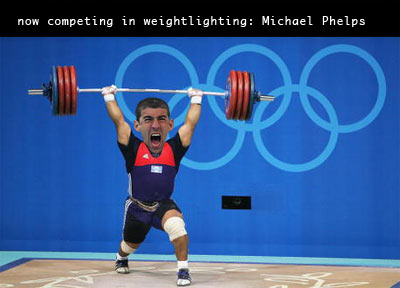 It’s been almost a week into the Olympic Games and I’m getting pretty tired of watching swimming, beach volleyball, and gymnastics on NBC. It’s time to mix things up.

We all marvel at how Olympic athletes can do what they do. Just about all the athletes are incredible human specimens. Let’s have a new Olympic rule that every single athlete must compete in one event in a sport that they have never competed in before. That’s right. You want to see Michael Phelps in Equestrian (or weightlighting as shown above)? How about everyone’s favorite kayaker, Benjamin Boukpeti, in Judo?

Actual medals will be awarded. Golds, silvers, bronzes are available for those that want them. See, you most certainly get athletes like a Michael Phelps going through the motions in their bonus events. That’s fine. If some people don’t want another gold, then that’s their prerogative. I can guarantee you that someone else in any given bonus event will be competing their brains out to get that gold. For this idea gives those that have no chance of medaling to actually get an Olympic medal. I’d love to see someone from Dijbouti get Olympic gold through the bonus event.

The entertainment value will be high for both fans and athletes. Some people will do surprisingly well and will impress fans and fellow athletes. And then there are those that will look like Joe Schmoe and show how truly human they are.

Exactly how will it be decided which athletes will compete in which sporting event? It will be random. I initially considering letting the athletes decide, but then you’d get athletes trying to pick sports similar to their own. Beach volleyballers will select indoor team volleyball and that would be kinda cool, but not cool enough. Each athlete will be randomly assigned a sport. During that selection process, athletes will not be asked to compete in an event that is within two days of the sport that they are at the Olympics for. Or perhaps it can work out that the athletes will compete in their bonus events after they have finished all their competitions. I’ll let the Olympic brainiacs figure that one.

All this makes me want to become a citizen of Dijbouti and become an athlete in some random sport just so I could have the opportunity to win gold in my bonus event. I’d be hoping I’d get placed in something like badminton against some really slow and non-limber-like weightlifters.

my most-read posts made in 2008 - Unlikelymoose

[…] Olympic athletes must compete in one foreign sport (659) I hope Olympic officials were among the 659 hits to this post. Though my Michael Phelps weightlifting photo is probably the real reason for all the visits. […]