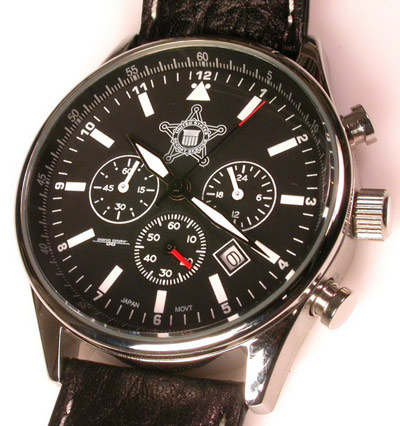 onthedash.com has done extensive research to discover that Barack Obama wore a TAG-Heuer Series 1500 Two-Tone Divers watch from the early or mid-1990’s until late 2007. (It’s not the watch shown above. More on the above watch later.)

I’m not a big fan of the TAG watch. The triangles on the dial’s frame are clunky. The variety of shapes (dashes, triangle, and circle) which represent the hours on the dial are cartoonish. The black outlines on these shapes only add to their Bugs Bunny appearance. There’s dashes on the debeveled surface of the dial frame and then the exact same dashes appear on the dial itself. That makes no sense.

I’m glad to see that the United States Service Service gave Obama a better watch for his 46th birthday on August 4, 2007. It’s a Jorg Gray JGC6500 Chronograph. I wonder what James Bond features this watch has that none of use know about. It is a gift from the Secret Service after all. Realistically though, there’s probably no crazy James Bond features integrated into Obama’s watch. It’s just fun to think about it.

Though it’s a nice-looking watch. I’d wear it. It’s the exact same watch that Barack Obama wears. I would totally buy this watch if I had the budget for it. My current watch loses a minute every couple months. It’s annoying (and it’s not the battery). However, my wardrobe is more earth tones and not black.

You can buy the watch for about $160. Search “JGC6500” at Google Products. That’s an incredible price for the exact same freakin’ watch worn by the most powerful man on the planet.

Since this is a promo catalog watch, you can get your own logo printed on it. The Secret Service got their logo printed as seen in the image above. You can create your own spin-off of the Secret Service logo and away you go. The first promo site I found that sells this watch has a minimum order of 12. So you’ll either need to get your buddies to buy in or you’ll have to do some marketing online.

In fact, barackswatch.com is already cornering the market. They’re taking advantage of the fact that Obama’s watch is from a promo catalog and they created their own simulation of the Secret Service logo and they are selling the watch for $325. They’re gonna clean up.

I don’t want Obama’s watch. It sucks. I want a watch that is cool.

spudart, you should check out the Fossil website. I was trolling around there the other day and they have some very cool and innovative watches