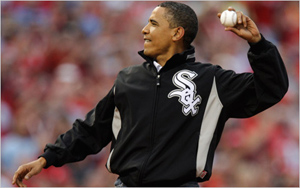 I guess the blogging/tweeting world is in an uproar because Barack Obama decided to wear a Sox jacket instead of the official All-Star game jacket.

I’m a Cubs fan. I hate the Sox (growing up on the South Side will do that to a kid). And I totally 100% respect Barack Obama for wearing a White Sox jacket for the first pitch of the 2008 MLB All Star Game. He’s a fan of the Sox. So he wants to wear a Sox jacket. So let him show his team pride and wear the Sox jacket. That’s baseball. We all have our favorite team. Obama opting to wear a Sox jacket shows he cares about his team and I think that’s great. And he’s always been very clear he does not root for the Cubs. Good that’s what a Sox fan should say. I respect that.

The quote I read in the paper had him saying “My wife thinks I look cute in that jacket”. What a HOOT! Those jeans aren’t doing him any favors though.

I tell you what. If i was a Sox fan (and thankfully i’m not) I would be totally buying that same jacket that Obama wore to throw out the first pitch.