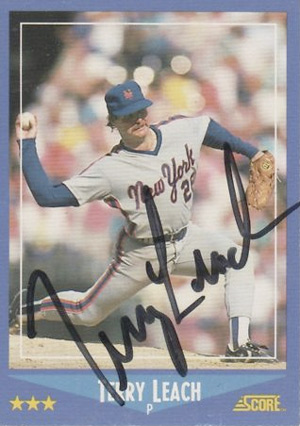 Terry Leach’s shoulders are almost at the same angle as his autograph. And the “New York” on his chest is in script, so it further unifies the autograph and the player. It’s four bucks on ebay (shipping included.)

In fact, doing a search for “Terry Leach” on ebay results in a ton of awesome cards. He’s a submariner, so most of his cards look awesome coupled with his angled autograph.

I came across his card doing a search for 1988 Score on ebay. That set mesmorizes me for some reason.