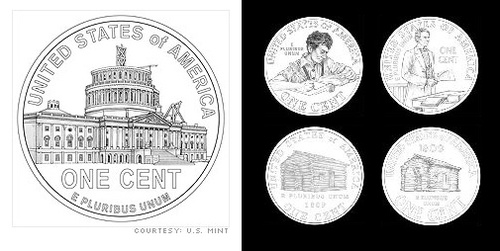 Abraham Lincoln is turning 200 in 2009. To celebrate there will be four new penny designs.

It’ll be fun to see portraits of a younger Lincoln in currency form. We’re so accustomed to seeing Abe with a beard. Though the Illinois state quarter already featured a young Lincoln, but the Illinois state quarter design is overwhelmed with other unnecessary, cluttered elements. When you’re putting Lincoln on a coin, let the power of his image dominate and that’s what the new pennies try to do. I’m not sure sure about showing all the props. I understand they want to communicate how Lincoln was a great writer and educator. But these coins tend to make that too literal. I’d rather see a simple, striking portrait of Lincoln. He doesn’t have to be shown doing something. It’s like the artist was thinking that simply showing a portrait of Lincoln wasn’t powerful enough. Psssh.

I like the choice of including the log cabins and the state capitol under construction. Structures are commonplace in American currency. Now Lincoln’s humble log cabin has joined the ranks of Monticello and the White House. Showing the capitol building under construction has great symbolism. It ties into how Lincoln saved and rebuilt our nation.

I don’t know what looks worse the state of the capitol building or abe lincoln’s hair as a youth. Haha. Like I should talk.

Despite being the only person left in the world who still picks up pennies in the street, I say dump it as currency.

It’s outlived its usefulness and the time/expense of producing, counting and designing new ones is a complete waste in a world of electronic transactions.

If a candidate would take up this proposal I might actually think about voting in the upcoming election.