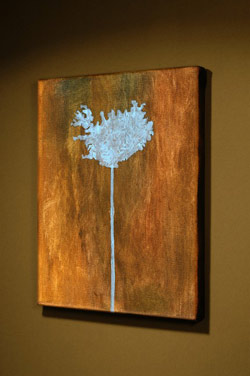 I have a new series of paintings for sale in my etsy shop for $10 each. The series is called “Maps on a Stick”. Shown above is “Iceland on a Stick”.

There’s a duality of represented realities in this series. The first such representational interpretation is that of maps. A single line deviates from the area of land illustrated by the respective form. Such a line implies a border line, road or any number of symbolic attributes associated with maps.

This series is painted in a manner suggesting antique surfaces. Such embellishments lends a sense of history to the series evoking notions of time’s past assumptive sense of reality defined by inaccurate measuring resulting in fallacious definitions thus giving the oddly singular, yet curiously charming, line a further sense of invalidity.

I posted three paintings and two of them sold in the first two weeks.