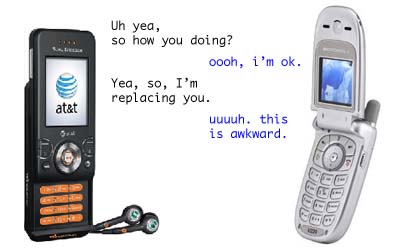 I decided to retire my Motorola v220. It was a good phone. It’s been in my possession for about 2 1/2 years (or maybe even 3 1/2 years). It’s held up very well with minor wear. I took a fair amount of photos on it once I decided to purchase DataPilot about a year ago to download this cameraphone’s photos. (Mac users can’t download with the v220’s provided software.)

My wife upgraded her ancient phone about a month or two ago. I kinda wanted to shop around service plans, but she wanted to stick with at&t. She handles the bills, so that was that. We were already committed to at&t for another two years so I began to look into upgrading my phone.

Plus, I’ve been taking more and more spur of the moment photos of my 12 month old daughter with the v220 and I’m not really happy with the 640×480 image size. The charm of VGA is great, but it has its limits. And the v220 could hold only about 45 photos. (no memory card expansion).

Enter in the Sony Ericsson w580i (black version). I was surprised to see it was “free” at Best Buy with a two year at&t contract. att.com is selling it for $30 with a two-year plan. I did wind up paying an $18 upgrade charge. So much for “free”. I hate that. But 18 bucks ain’t bad for what I get.

2 megapixel camera (The first digital camera I bought back in 1999 was a 2 megapixel Nikon Coolpix 950. It was honking huge. Not that the imaging chip on the w580i matches the 950, but I’ll be able to get 4×6″ sorta semi-decent prints out of this cameraphone)

FM radio (no AM which I would love, but no one offers AM radio)

MP3 player (not sure if i’ll use this)

I especially like that it’s a slider phone that reveals the lens when slid out. This way the lens is protected when not in use.

Oh and it has Pac-Man on it. Pac-Man kinda sealed the deal. (yes, I could buy video games for my phone, but I don’t like paying money for cell phone games. My v220 had stupid games like Bejeweled.)

In the end it’s really about the service.

I won’t go on a tirade about AT&T. I like it here too much.

yea. pedometer. I didn’t realize it until i was playing with the phone last night.

i just played with my phone and it does what you’re looking for! They call them “laps”. You can start the stopwatch when you leave your apartment. Hit “lap” when you get to the train, hit “lap” at belmont, hit “lap” at grand, hit “lap” at your arrival at work. It will show all the times of your “laps” and the combined total time.

I’m waiting for Monday to see what sort of new iPhone gets released and if there’s a 2-year deal with AT&T.

Moose, I think I have the same old phone as you (moto). I severely need a new one too. But I’m with Verizon. I haven’t checked out the Sony (don’t know if I can even get that with Verizon), but I will look into it. I don’t mind Motorola, but since they are retiring their cell phone sector, I don’t want to get another one of theirs.

I bought Ms. PacMan for my moto when I first got it two years ago. It was like $7. I guess I’ll lose that when I get rid of the phone.