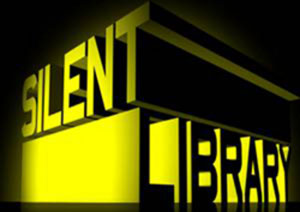 I haven’t had a favorite TV show in a while. Iron Chef was awesome before it got really big. When it became main street it was still ai-ight. MXC was hilarious for a few months, but then got old pretty quickly. For a good while Globe Trekker was my fav, but they don’t really air any more shows on PBS and the new ones that do pop up every once in a while are incredibly lame and boring.

Enter MTV’s Silent Library. I’ve only seen one episode and it was only about half of it, but it’s pretty hilarious. Ok, so it’s a game show. You got one team of 6 players. They basically draw straws (cards are actually dealt) to see who must perform a crazy stunt. The episode I saw featured muffins being fired from a potato gun at a contestant, a wrestler throwing a contestant onto a table, a contestant attempting to eat a snow cone covered in fish oil and other wild stunts.

The kicker to the show is that it takes place in a faux library and all 6 contestants must keep the sounds to a minimum while the stunt is being performed. If the stunt is successful AND if they remain quiet enough, then they win money. It’s this contrast of wild, silly stunts in a completely hushed environment that makes this show hilarious. There’s lots of snickering going on. It’ll bring back memories when we all would do stupid stuff during study hall and try to get away with it.