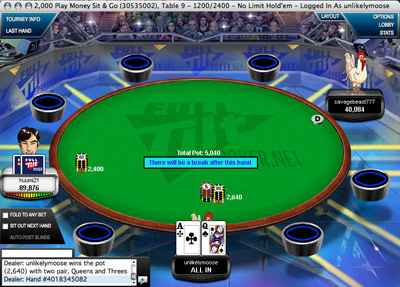 I play on fulltiltpoker.net once in a great while. The games don’t really match the real-life experience because it’s play money and people throw it around like it’s well, play money. Tournaments tend to weed out the wreckless people and competition is more real. I’ve played in three tournaments since I signed up for fulltilt in May. All three started with 90 people. The first two tournies i finished in 29th place. Not bad. I managed to finish in the top third.

Two nights ago, I finished THIRD! My wife was pressuring me to carve the family pumpkin about half way through the tournie so I played a little more loose than normal and got on a good roll. The tournament started out with 9 people at 10 tables (10×9=90). When there were about 3 or 4 tables left, my bankroll was getting pretty low. I was patient and waited for a couple of good spots to go all in and it paid off. I managed to work my way up from there and actually become the chip leader. It was very exciting to be on one of the final two tables and then finally move to one final table (when it went from 10 people to 9).

I entered the final table being the chip leader. That’s right. I was the big guy at the table. Everybody was eyeing me down. They musta been thinking, “this unlikelymoose guy is unstoppable”. I was patient and waited for decent hands to play.

I managed to maintain the chip lead until a hand when three people with decent bank rolls went all in. The winner of that hand wound up sitting on about 50,000 (versus my 25,000). He got on a good roll and managed to have a monster stack (about 75,000 to my 25,000) with four people left.

Then I got stupid. Here’s the setup. Chip leader was to my left with 75,000. I was second with about 25,000. The guy in third had about 24,000 and the fourth player had 2,000. The 24 grand guy and I got into a hand one-on-one and I went all in before the flop with Ace 8 suited seeing as I had to catch the chip leader somehow. It’s not a bad hand for heads up. He had Ace Jack. Whoops. In retrospect, I got way too cocky. I had the second highest chip stack and went all-in with a weak Ace even though it was suited. Needless to say, I was left with about a grand while the chip leader sat to my left with about 80,000.

I managed to work it up to about 2,500 while the fourth guy got knocked out. I went ALL IN with Ace-Queen, a great hand for the low stack. It didn’t work out and I finished third out of ninety. Then, I carved a pumpkin.

did you carve hearts for eyes, diamond for nose, and a spade mouth?

That was my 1082nd comment on your blog. I have left 3080 comments on spudart.org