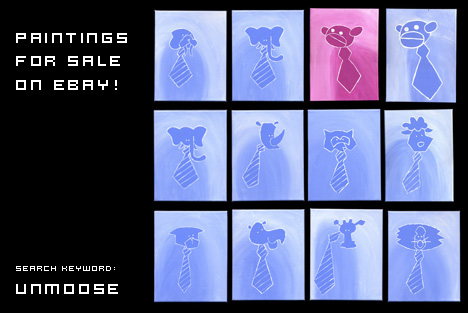 FINALLY! I have posted 11 new paintings on ebay.

I call the series, “Animal Necktie”. Each painting features an animal wearing a necktie.

You can find them on ebay searching for the term, “UNMOOSE”. Or you can click here.

Why are these animals wearing neckties?

Since the dawn of the human race, we have been striving to bring our own humanity into the rest of the world. Perhaps it is man that is subjecting these animals to wear our society’s symbol of cultivity. Man endears the creatures of this earth and wishes to understand their behavior and thought. However, man frustratingly cannot reach this goal. Instead, he acts on the foundation of what man untruly knows best: humanity. Thus, humanity is brought to these creatures. After all, these paintings were created by the hand of a human.

Or perphaps these animals are creatures of fantasy. (They are completely blue or completely pink after all). They choose to emulate humanity. Understanding the reason for these animals’ tie-wearing behavior cannot be decided by humans for we can not efficiently communicate with the animal kingdom yet.

The monochromatic palette allows for the series to continue into other colors.
Bold use of color is a technique used by humanity in defining fashion which relates to the use of neckties in the series, which in turn further emphasizes the contrast between man and animal.

There will be more series of paintings posted in the coming days.
Still to come:
Lincoln’s Contemporaries
Astronaut, Say It Ain’t So
Presidents Drinking Coffee

they seem kinda eerie to me. Maybe it they had bodies.

I have to say that these paintings look so much better in person. When looking at the actual painting, you can truly appreciate their visceral qualities.

i agree, they look a lot better in person. they are very nice.

The animal paintings auctions are closed. Thanks to everyone who purchased paintings.

The following paintings have been sold: Pink Monkey, Blue Rhino, and Blue Giraffe

There are some new paintings on ebay now!