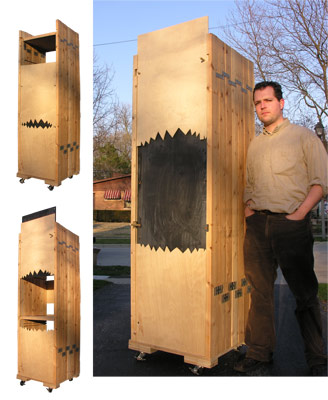 Back in 2003, when I moved into my house and I had a completely empty garage, the very first thing I built was this rolling shelf system. I had an old PowerMac 7200 with a beat-up 21″ monitor that needed a home. The result was the Monster 2003 Shelf structurally built with 2x4s, connector plates, and a ton of glue. Sliding plywood and chalkboard panels gave the Monster Shelf moving jaws. And rolling wheels made the Monster mobile. I planned on adding arms and painting a face on the beast, but never got around to it.

I constructed the 2×4 walls in the garage and assembled the beast in my studio. The Monster 2003 Shelf moved from my 2nd floor studio to the garage around 2005. It was a bit tricky moving the 7 foot Monster out of the room. I had to chop off part of the top. From there he just slide down the stairs and rolled out the front door and down the driveway to the garage. There it held a disassembled 7200, an old VCR, and a box of spray paint cans. In the Spring of 2007, the Monster 2003 Shelf was put to rest. I kept the plywood panels and rolling wheels. The rest went to the curb for the garbagemen to enjoy figuring out how to dispose of the beast.

That’s pretty sweet! Better be careful when spud comes over though … he might stick some googly eyes on it!