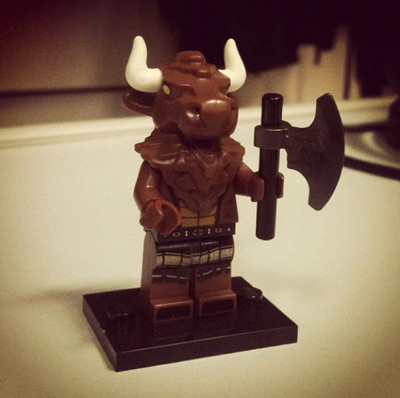 I love LEGO minifigs. I love the secretive nature of feeling around the package trying to guess which in the series of 16 is in that little delightful bag of secrecy. (Note: It’s not a mystery. Mysteries aren’t revealed, secrets are.)

It’s best when I buy a package at lunch time, bring it back to the office and have co-workers guess its contents. It’s great fun and is encouraged for any office environment.

Here’s a photo of all 16 figures from series 6.

This was the most guesses ever! And everyone had a different guess. Drama!
My years of Lego minifig guessing experience paid off. It was indeed the Minotaur. I was quite pleased (more so that he’s pretty cool and not as much as I was right).

I was so mad I got it wrong, for hours afterward I’d play it over in my head knowing I should have guessed the Minotaur!! 🙁 Blarg. Still I swear those horns were hidden in that package…..

Super fun though, please include me again though, fo sho!! 🙂

He looks good enough to eat!

Tom! I was thinking the same thing. Minotaur looks like he’s made of chocolate. Is he?