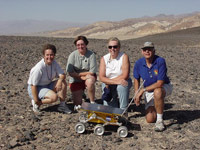 I know this is old news, but i just found out that we’re celebrating the two year anniversary of the Mars rovers’, Spirit and Opportunity, expedition on Mars. I applaud NASA for successfully implementing this job; especially since they only had a life expectancy of 90 days. We have received some wonderful photographs as a result of these little rovers’ hard work.

But i have a couple gripes. Firstly, i think the names “Spirit” and “Opportunity” are so lame, cheesey, and unimaginative. Obviously these names were decided by some NASA committee. Can you imagine if any of the planets in our solar system had such stupid names? Imagine if Jupiter were named “Spirit”. STUPID! What is Uranus was named “Opportunity”? TERRIBLE!

Secondly, our beloved Mars rovers have covered a total of 7.5 miles in the last two years. I think it’s time for NASA to send an SUV-sized rover to Mars. I want the Mars SUV Rover to cover at least distance between New York and California. I bet the Mars SUV rover would find alot freakin’ cool stuff.

I agree with the lack of originality when it comes to the names of the rovers. However, making an SUV sized rover would cost John Q. Taxpayer about 1000 times as much money as the little ones.

That’s the challenge i present to NASA. I want SUV-sized rovers on Mars, but the taxpayers shouldn’t pay any extra money.

the rovers can’t go shooting over the terrain at top speeds – we don’t know if there’s a boulder in the way, or if they’re in a valley, or what. you don’t want to damage the rovers just to try a little joyriding!