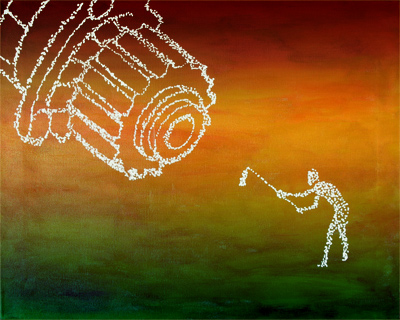 There is a new giclee print available for purchase on Etsy. The print is derived from an acrylic painting on canvas.

Presented in this painting are two subject matters: a giant industrial gear and a man with a hoe. How these subjects interact is the study of the painting.

It’s unclear of the man’s true actions. Perhaps he is simply tending to the earth with hoe in hand. This practice dates back to ancient times. Man is painstakingly caring for he and his family by means of the simplest of tools. This heavily contrasts the functionality developed in the Industrial Revolution where tools were ever increasingly more complex to fulfill the desire for faster and more efficient production.

Or perhaps the man recognizes the giant gear. The hoe takes on another ancient function; that of weapon. It may be that the man is threatened by the power of the mighty gear and he is using his trusty hoe to defend his land. It may also be seen that the man is submissive to the gear and offering his hoe as a gift to the gear so that the gear may tend to his land.

The gear’s intentions are also unclear. It may be present to assist the man and help care for the earth. Or the gear’s function is that of destruction and intends to eradicate the man and consume the earth. Or perhaps the gear is simply observing the man. It’s up to the viewer to observe for him/herself to determine the role of gear and man.

Both the industrial gear and man with hoe are both composed of white dots (reminiscent of Pointillism). This suggests that both subjects are of this earth and must find a way to properly co-exist.

The background is stunning