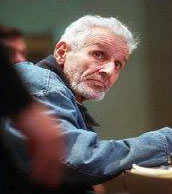 I really thought Jack Kevorkian died years ago. I’m dead wrong about that. He’s out of jail and now running for Congress.

His name brings back some memories. He was the subject of a couple pieces of art that I made in college in 1994. The first piece was really just an illustration. We were studying the properties of lino cuts in Printmaking I. The photo above was the starting point for that lino cut. I know I have some prints buried somewhere in the house. I’m full of puns. First I said, “dead wrong”; now I slip in “buried somewhere”.

The second piece was a hot glue drawing on glass. JK was portrayed as Cupid shooting death needles. I’m pretty sure I threw that piece out. But I remember really enjoying the process of making that piece. I had the same teacher for both classes where JK was my subject. She was quite excited that I was studying him.