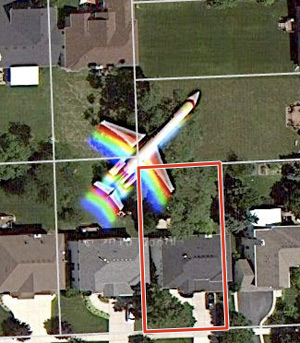 Yea, that’s just it. It’s a plane. I’m house shopping and this one house has a plane flying over it in Google Maps. I can’t say I’ve seen a plane in flight captured by Google Maps until now. It’s pretty slick. Though the sellers probably don’t fell the same way when potential buyers see their house is directly below a flight path. However, Lombard, Illinois is far enough away from any airport that it doesn’t make any difference.

Hit up the interactive map below or hit up this link.

Wow! That’s quite a find! Looks like this has happened to others online too! Take a gander at a google images search for airplane “google maps”.

This looks like something out of a Skittles commercial!