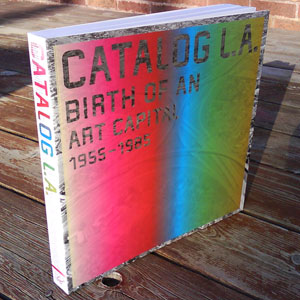 You like art books? I mean good art books. The bargain book section at Borders is usually no place to find such books. Besides featuring the same 6 or so artists over and over again, the quality of editing, layout, and printing is usually incredibly poor.

Yea, it’s a bargain. But what do you get in this book? “Catalog L.A.” aims to be a comprehensive collection of art that established L.A. as a juggernaut in the art world. Pages are classified into 3 categories: “arts”, “culture”, and “in the news”. “Arts” focuses exclusively on the art itself. “Culture” ranges from features about artists to significant moments in popular culture. “In the news” also covers a wide spectrum from gallery events to political stories.

There ends up being quite a heavy focus on pop culture events. 50-80% of such features could have been removed and replaced with under-represented mediums such as photography while still maintaining the importance/presence of pop culture in the art world. Performance art is given a high priority which is unfortunate in my opinion. It’s often difficult to shed the inherent natural self-indulgence that comes attached to performance art. Painting plays second fiddle while sculpture rounds out the top three mediums.

There’s a great balance between imagery and text. Such information include ephemera, critical texts, interviews, and a time line. Also, the first 53 pages offer 5 essays (including the foreword and preface). The entire book is intelligently designed and laid out. I can’t say enough about a book that has well-invested design. It’s action-packed without being crammed.