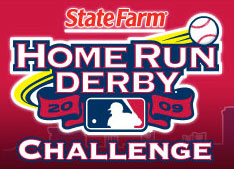 Who’s gonna win the MLB Home Run Derby tonight? Will the HGH science experiment known as Big Poopie put on the ultimate display in front of his home crowd? Or will a relative no-namer in Nelson Cruz shock the baseball world? Actually Joe Mauer winning the whole thing would be the biggest shocker.

Pick the correct order for each round and if you’re right, you could win two tickets to the 2010 All Star Game in Anaheim, California.

I have a very good track record of picking the Home Run derby champ. This year is tough. My formula suggests that I go with Carlos Pena. However, Big Poopie surely seems unstoppable. Yet, I will remain true to my formula and stick with Pena.

TOO EAGER
Prince Fielder. There’s always one guy that desperately wants to prove he’s the best and ends up overswinging all the time and wearing himself out after the first 3 or 4 swings. Fielder is that guy this year, 100%.

TOO GREEN
Brandon Inge. The Too Green player is overwhelmed by the pressure and experience of home run derby. Chalk him up for 2 homers tops. Inge is one of my favorite players, but he needs to get this first derby under his belt and he’ll be one to look for in future derbies.

TOKEN “WHAT THA” PLAYER
Joe Mauer. His only purpose for being in this event is to show that good, solid hitters with a little pop ALWAYS choke terribly at the Home Run Derby.

FAVORITE TO WIN, BUT NEVER DOES
Albert Pujols. Rarely, very rarely does the favorite win. Though his obscene abuse of HGH may overcome this rock-set “favorites never win” factor. Expect Chris Berman to recite his favorite love poem to Big Poopie for 90% of the Home Run Derby coverage. It’s gonna be gross.

POWER GUY THAT SURPRISINGLY CHOKES
Adrian Gonzalez. There’s always one guy who has tremendous power and ends up doing ABSOLUTELY nothing. It’s usually a somewhat younger player who is too well known to be tagged as the “Too Green” player. Sometimes it’s even one of the big superstars.

THE GUY THAT WINS
You want my secret formula? Ok, fine. The single favorite pick by the general consensus never wins; we know that. But not even the top 2 or 3 win. The ESPN guys usually have their favorites and it’s always the overbulked superstars. Never go with them. They’re always wrong. 90% of the time it’s a guy who has the power to win it, but he may not necessarily be known as a primarily power guy. They also tend to be very calm, collected, focused, and possess the stamina to go all four rounds. Carlos Pena is that guy this year. Adrian Gonzalez is intriguing because he’s not at that mega superstar status, but I think he’s too well-known for his power and thusly he falls into the category that he does. Nelson Cruz I think has the temperment to win, but he’s still too green.

Ryan Howard has had an interesting run in the HR derby. He won in 2006, but then fell flat next year in 2007 finishing 7th with just 3 homeruns in the first round. Actually, I should adjust my picks. I don’t think Ryan Howard will do that great this year. When he won in 2007, he did it with 8, 10, 5. That was in non-homer friendly Pittsburgh. They are non-homer friendly st. louis this year, so maybe Howard will do alright. I’ll keep it as is. Round 11. Ryan Howard2. Albert Pujols3. Joe Mauer4. Adrian Gonzalez5. Prince Fielder6. Carlos… Read more »

Pujols is playing at home in the homer derby this year. How did other players do in the home run derby when at home?

I was too lazy too look it up before 2000. Basically, home players can do very well. Or not.

I will laugh if Brandon Inge carries this away.

moose, what’s your guesses for the tie-breakers?

spud, I just quickly added up a previous year’s totals in my head and used them: 170/30-something.

I was too upset after the first round bat-off between Pujols, Pena, and Mauer. Pujols should have never been in the bat-off. One of his homers in the first round was not legit. The fan CLEARLY reached over the fence to grab that fly ball. I replayed it on Tivo because ESPN won’t dare question one of Big Poopie’s “home runs”. It should have just been between Pena and Mauer and Pena would have advanced. I stopped watching after that.

Looks like I was 100% wrong about Fielder. I’m losing my touch.