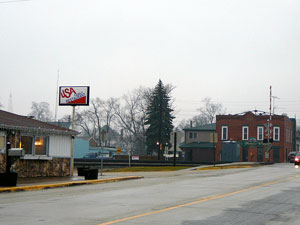 A couple days ago I blogged about the neat Google Maps image of Buckingham Fountain in Grant Park. When I began my search for this image I stupidly typed in “Grant Park” into Google Maps. Clearly it was an exercise executed without much thought. Interestingly enough though, Google gave me the map of Grant Park, Illinois.

It takes about an hour to drive from Grant Park, IL to Grant Park in Chicago (68 minutes per Google Maps’ suggestion. Basically it’s taking Route 1 N to 394 N to I-94 W.)

It’s directly south of Chicago in Kankakee County. It’s not too far from the Indiana border.

Wait. So you are telling me you drove through Grant Park? (haha. it’s funny saying that). AND you didn’t ask anyone, “where is buckingham fountain?” You should have stopped off at a gas station and asked for directions to Buckingham Fountain.

I live in Grant Park. We get asked about Buckingham Fountain all the time, as well as if the small park we have is Millenium Park. We get a good laugh out of it. You would be surprised on how many people ask us how we have an address in Grant Park Chicago. I would tell them i live on the third park bench to the right of the fountain. It’s a small town that is for sure, but has lots of spirit.

Way to have a sense of humor Princess. Plus it’s nice to see you speaking up on behalf of your town.