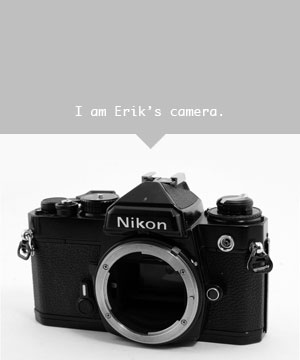 This week I bought a used Nikon FE 35mm film SLR camera on eBay for $62 (shipping included). That’s an awesome deal for an FE in great shape. I had budgeted to spend twice as much. Tomorrow’s post will have a checklist of things to look for when inspecting a used SLR camera. I checked all the camera shops in the Chicagoland area that sell used cameras and no one had the NIkon FE. So I went the online route.

WHY?
A couple weeks ago I decided to begin photographing with film again partly because I wasn’t entirely happy with the current SLR options offered by Nikon. So I’m going rogue and thumbing my nose at Nikon’s current digital line (though I still use my D100 frequently). But it’s mostly because I have vague ideas for making art with contact sheets, negatives, and possibly slides. Plus, I saw my Dad pull out his 35mm SLR a couple weeks ago and I though it was cool.

MY OLD SLR IS DEAD
I dug out my old Pentax ME Super from college, but the mirror became stuck with the shutter blades closed and the film advance lever wouldn’t work after I hit the shutter just once. I read a trick online where you can use a shutter release to try to get the shutter to fully trigger. Well, I broke the plastic shutter trying to get the shutter release attached. So now there’s two broken things on that camera. Actually there’s three. I remember the camera being off by an f-stop or two when in college. It’s too bad because a little bit of research online revealed that the Pentax ME Super was actually a nice camera. And the lens I have the camera is pretty nice too. f/1.4 50mm prime Double Super Coated.

THE BUDGET
So it was time to look into getting another 35mm film SLR. Nikon only offers two new 35mm SLR cameras: Nikon FM10 (about $300) and Nikon F6 (about $2800). $100-125 was my budget from the outset. Anything more would start to take too much money away from my long-term DSLR visions.

NOT-WANT LIST:
– body style with the lumpy grip on today’s SLR bodies
– LED light meter (I’ve used both needle and LED meters in the past and I like the needle better)
– auto-focus or manual focus?

MANUAL FOCUS
Based on my want list, not-want list, and budget, my decision was automatically made for focusing system. I had to go with manual focus. I suppose it goes hand-in-hand with the idea of kickin’ it old school.

CONCLUSION
The Nikon FE fit the bill. To confirm my findings, I asked my dad his opinion and I found out his 35mm SLR is not a Nikon F as I originally thought. He has a Nikon FE. Perfect! This was a very nice coincidence. We’re on the same wavelength. Like father, like son.

Now I just wait for my FE to arrive in the mail.

who or what is gonna develop all your film?

still looking around for best deal for film developers. I learned tonight that Target is out of the running. Not only do you have to drop off your film with Customer Service, but there’s ZERO info on their services. The girl had to guess how much it costs to develop film and prints. I asked her how much 24 exposures with 4×6 prints would cost. She guessed between $10-12. No thanks.

I also may develop my own black and white. da da da daaaaa.

Although you proved me wrong by getting this camera, I still contend that it will be nothing more than a toy/novelty.

do you contend, Mark, that the art of photography is nothing more than toys and novelties? Do you? Do you? Don’t make me get out the glove.

i know, mark. i was just razzin ya.