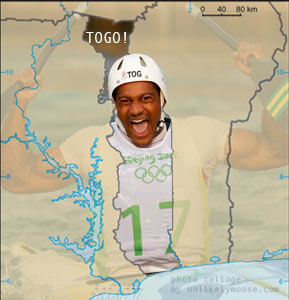 One of the benefits of being unemployed is that I get to watch the Olympics during the day while I’m working on my portfolio stuff. Today I got to watch men’s single kayak. It looked really grueling. The water raged monsterously while these guys navigated tightly around the checkpoints. My kayak would tip over in an instant. That’s for sure.

Benjamin Boukpeti of Togo was the very last competitor to race. It was high drama. It looked unlikely that he would win the gold because Alexander Grimm of Germany had a huge 2.4 second lead over Fabien Lefevre of France (173.30 seconds). Boukpeti mastered the course and won the bronze with a 173.45 second finish. When he saw he placed third, he broke his oar on his boat in celebration. He had just won the very first Olympic medal for Togo! (Togo is a country in west Africa. It’s in the armpit section of Africa.)

Now Benjamin was born and raised in France; which explains his very heavy French accent when he was being interviewed after the race. His dad is from Togo and Benjamin only visited Togo once as a small child. This kind of stuff is actually pretty annoying. He should have been competing for France. France got ripped. But I’m happy to see Togo get their first medal. I’m sure the people of Togo are enjoying it much more than France would have.

You know what’s strange. When I was unemployed, it at the beginning of 2006–during the winter olympics. Although I don’t recall watching THAT much olympics.

The strangeness being that when i was employed, it was also during a time of the olympics.