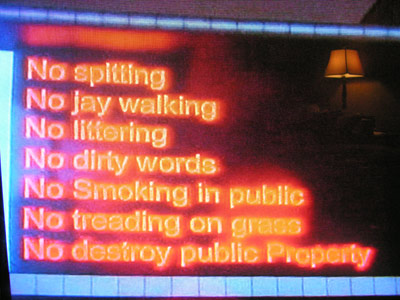 So, I was watching my favorite television show, Globe Trekker. Megan McCormick was in China and pointed out this sign in a major metropolitan city. (Sorry, I don’t remember the city). It was a giant sign. I’d say it was about 40 feet wide. I just had to take a snap shot of the television. That’s my lamp reflecting in the corner.

No spitting (I agree. Spitting is nasty. People do it to display their dominance. It’s annoying)
No jay walking (Screw that. No cars means I can walk)
No littering (Yes! Yes! I really can’t stand litterbugs. Those that litter are lazy, ignorant jerks.)
No dirty words (Yea, we all could stand to swear less)
No Smoking in public (Why is “Smoking” capitalized? a good idea nonetheless)
No treading on grass (Keep your treading on the sidewalk, sucka)
No destroy public Property (Another questionable use of capitalization. And the grammar is something to behold.)

And what’s up with the Chinese government putting this in English? They think English-speaking countries are a bunch of spitting, jay-walking, swearing, smoking, grass-treading, litterbugs who like to destroy public Property?

I wonder if Chinese authorities ever caught some American doing all seven things at once. Though it would be a tad difficult to jay walk and tread on grass at the same time.

why is “Property” capitalized?

The city is Shanghai. I just watched the same episode tonight.