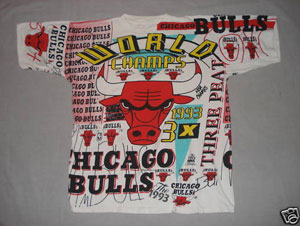 I’m getting poised to be the first person ever to win two Super Bowls in my fantasy football league. Our league has been running since 2003 and a different person has won every year. We’ve had only 14 people participate in our league since 2004. Not only would I be the first to win two titles, but I would be doing it back-to-back!

If I win the Super Bowl this year, then I will consider buying a Chicago Bulls 3-peat t-shirt from 1993 and cross out everywhere where it says “Chicago Bulls” and write “FIGHTING TOKUGAWAS” and wear that shirt on draft day 2010.

Here’s one for $14 with shipping included. (shown above). Isn’t it a beauty?

Don’t get ahead of yourself. You still have to get by the Regular Season Champs, the Fightin’ Cheeseheads.

The repeat championship was completed on Monday, December 28, 2009 thanks to a stellar fantasy performance by Adrian Peterson and not so stellar performance by Sidney Rice and Percy Harvin (thanks, Brett Favre and especially Brad Childress)

BRING ON THE THREE-PEAT!

Tell me about it… Brett Favre and his measly 5 points last week kept me out of the Superbowl. I should have won the whole thing.

Hey Mark, should I show up on New Year’s Day wearing one of these? http://bit.ly/7WLQH9

Are you guys definitely coming on New Years Day? Karen sent out an email asking for RSVP’s and never got a response.