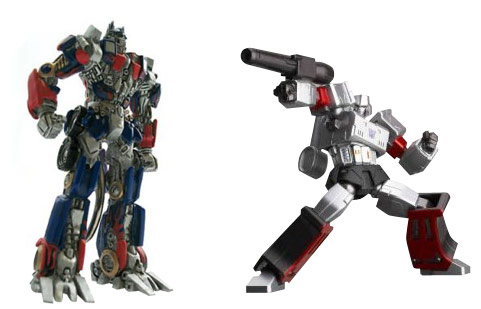 Keep in mind that Megatron killed Optimus Prime in the 1986 movie mostly because Hot Rodd got in the way. And Optimus Prime kinda sorta killed Megatron in the 2007 movie even though the humans put Megatron on his deathbed (which is so lame) and the Allspark somehow put the final nail in Megatron’s coffin, but we’ll still give Prime credit for helping kill off Megatron in ’07. So neither character truly defeated their foe in each respective movie.

This is a really tough call for me. ’86 Megaton has got his mega-blast bazooka ready to go (which he didn’t have in the infamous ’86 fight scene.) The ’07 Prime displayed his brute in one of the most awesome scenes I’ve ever seen where he used his plasma sword to destroy Bonecrusher’s head. ’86 Megatron had a certain swagger and thirst for desctruction that seemed unstoppable. Then again, Prime was about to finish off Megatron in ’86 if Hot Rodd didn’t jump in the way. I was disappointed in ’07 Prime’s fight scene with ’07 Megatron. It’s clear that ’86 Megatron is fair superior to ’07 Megatron. No human could have put a scratch on ’86 Megatron. I’d go with ’07 Prime if his fight scene with Megatron wasn’t influenced so much by the humans.

I can’t decide. I need help. Someone persuade me.

Gotta go with Prime all the way. He’s one bad Mama Jamma!!

Megatron was powerful and all but he was and is no match for Prime.

ok. you guys convinced me ’07 Prime would destroy ’86 Megatron.