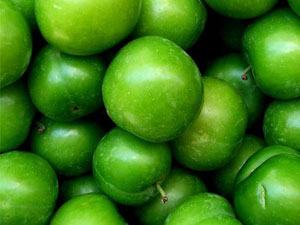 Ok, so I learned something huge today. My name, Erik, is also the name for a green plum found in Turkey. One of my coworkers told me this today. Please leave a comment if you know where there may be a market in the Chicago area that sells eriks.

I am a green plum!

Nutritional Facts about erik, the green plum here. 45 calories per erik. 11 carbs, 1 gram of sugar and 1 gram of dietary fiber per erik.

scientific study in the erik genotypes

A man named Gilbert left a comment on this blog describing eriks: “Eriks are hard, green and sour and Turks dip them in salt. They serve them as dessert in our school canteen, which given the complete lack of sweetness I find unacceptable (see comment at the beginning). I bought some eriks the other day for my wife, who likes them. She complained that the ones I had got were too small so didn’t taste nice! The expression on my face meant something like ‘… ?'”

A person named “Stranger” agreed with Gilbert and said, “Green plums are for throwing”

photo from harika, a blog by a “compulsive sketcher, tea drinker, and nomad” in Istanbul. Szaza’s caption for the photo says:
Erik, Green Plum: super-sour and tart, they’ll make you squint.
During a Fun Day at my primary school, we raced with eriks
balanced in spoons for coloured ribbons.

The first place I would try is the new Chicago French Market at the Ogilvie Transportation Center. If I didn’t find it there, I would call Whole Foods and see if they could special order some for me

Apparently there is a lady who sometimes does tours of little ethnic grocers in Chicago. I would try to find her and ask what grocery store might carry these.

If you get some, I want to try one.

Here is an article about that lady who does the tours… There even appears to be contact info and a website at the end of the article.

Thanks, Mark and Tom!

Are you sure about the genus name? Prunus cerasifera appear to hve red leaves, and these Green Plum trees have green leaves for sure.

Anyway it is May now and these are in season this whole month. It’s the only month they are available for purchase. So if you want to taste them now is the time to look for them. I love these, so already bought my first batch. Their flavor is like Sorrel mixed with Granny Smith Apple. Very very good.