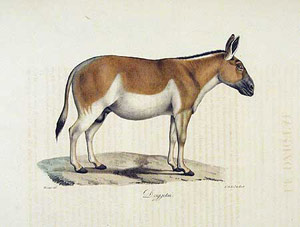 Presenting the first installment of: ANIMAL OF THE DAY: dziggetai

Since this post is being made on the very last day of 2005 and since this is the first installment of the series, then the dziggetai becomes the default UNLIKELYMOOSE.COM ANIMAL OF THE YEAR! Hooray!

dziggetai info
also known as the Gobi Wildesel or Khulan
wild mongolian donkey which can run long distances
only 20,000 known to exist in Mongolia; largely in the Gobi desert
The Khulan has been protected since 1953 in Mongolia, though farmers perceive the dziggetai as a competing threat to their livestock in this remote region.

dziggetai links:
solid chunk of info on the dziggetai (translated from German)
more info on the big DZ (it’s a pdf).
learn how to use a dziggetai for your chariot!
Bible Picture Gallery
The dziggetai doesn’t show up in the laborlawtalks dictionary. Wad up wit dat?
some band named a song after the great dziggetai
an astrology class at Case Western Reserve University gave out assignments to students splitting them up into groups. One of the groups was called dziggeatai. Oh yea!

I vote that the next animal of the day be the misunderstood aardvark.

So this is where the word “ass” comes from: Greater Wild Ass or Dziggetai (Asinus hemionus)

wow, what a fancy spam filter, it automatically put astericks in place for the letters “ss” in a**.

That’s funny that the spam filter catches it here in the comments, but it doesn’t seem to apply to the most recent comments table at the left.