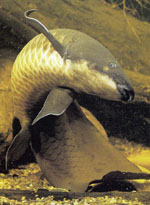 The Shedd Aquarium has an 80 year old fish. The Shedd is only 75 years! The fish arrived in time for the World’s Exposition which doesn’t make much sense to me. Cuz the World’s Columbian Exposition was in 1893. But it’s cool to say, nontheless.

George Parsons, Shedd’s director of aquarium collections, seems to have a grudge against this fish. He said,”They’re not the most charismatic fish. But they are so primitive and have been around so long that it makes up for the charisma they lack.” He must have had a bad run-in with this fish.

oh, this is neat. Lungfish are thought by scientists to be the “missing link” between fish and amphibians because they also breathe air.

wow, i just made four comments in a row. i feel like i’m a spammer.

This is a pretty cool fish indeed! You know what fish ISN’T cool? The creepy snakehead fish! +shiver+ BLEH!

ooo that conceptart link is… like from another world.

fish don’t need charisma, they have other good qualities relative to being a fish. maybe charisma isn’t high on the list of what makes fish attractive to each other. what seems like charisma to humans may be seen as really bad manners or really gross behavior to other fish. so charisma-less may be how fish prefer to be.

Dear Abby,
I hope the fish that i get in my future aquarium have lots of charisma. Am I hoping for too much?

maybe fish find that their charismatic properties are stunted by being confined to a little [compared to the ocean] glass box their whole lives.

are you pursuing an aquarium, spudart???

yes, i am.
1)What size is your aquarium?
2)What sort of filters should i use?
3)What color are your rocks? Any gravel buying advice?

I forgot to post the cost for the gravel. Petco and Petsmart have those smallish bags for about $3 each. I think I needed 6 bags for the twenty gallon tank. They make larger bags, but they were all out of the brown gravel I wanted. So the gravel was about $18. Depending on what fish you get. The basic fresh water fish run from $1 to $7 each. Bet on paying about $3 per fish. Say you get 8 fish. That’s $24. Flakes (food) is about $3 per container which lasts for a long time. You could buy water… Read more »

how old is the oldest tetra fish?