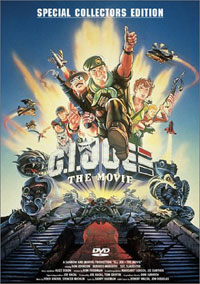 I just watched G.I. Joe: The Movie, 1987. It’s probably been about 20 years since I last saw it. Overall, it holds up pretty well once you get over the silliness of all the Cobra-la worms. Though the core idea that Cobra-la’s organic nature plays a contrast to today’s cold technology is fun to think about.

And I completely forgot that the movie revealed that Cobra Commander was not human, but rather a nobleman of Golobulus‘s Cobra-la underworld and that he was sent by Golobulus to form the Cobra army and overtake the world. Crazy stuff I tell you. The movie also revealed Cobra Commander’s face! He had like 8 eyes!

Nemesis Enforcer was pretty freakin’ cool, too. Mercer, too (the Cobra Viber defector who was in Sgt. Slaughter’s Renegades).