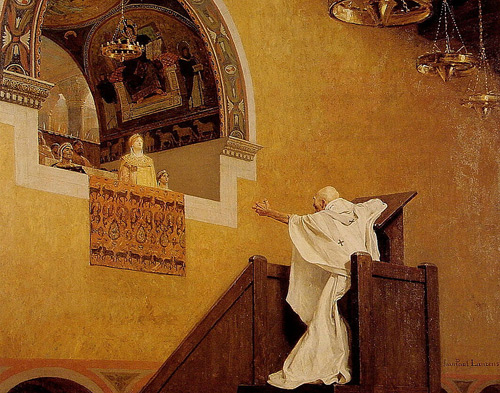 The formal interplay of space and scale sharply enforces the prevalent emotional vibe. In the foreground, a white-clad Chrysostom dynamically expresses emotion inside a contrasting rigid and deeply brown podium while being completely consumed against the richly colored, enormously flat wall beyond him. His wrenched fist is even neatly framed in the tightly composed architectural elements that frame an even more tightly constrained emotion found on the stubborn empress, Eudoxia, the direct contrast to Chrysotom’s posture.

Her centered position in the arch, further emphasized by the hanging tapestry, demonstrates her power. And the ensuing depth of her surroundings that continue further and further into the distance symbolizes her attempt to display unending strength. Yet at the end, her posture remains simply what it is: a facade to emote a false sense of power. She unwisely remained unyielding to Chrysotom’s criticism of her pretenses.

Eudoxia’s face is but a small detail and Chrysotom’s face isn’t even shown, but there’s plenty of smartly composed angled lines, various geometric shapes accompanied by smartly placed ornate details and flat planes of color that help emphasis the story.

For some background, Eudoxia didn’t like that Chrysotom, Patriarch of Constantinople (an important Early Church Father), was criticizing her. So she banished him and eventually sent him off in severe weather to another location and he died en route in the year 407.

The inspiration that led to my encounter with this painting was from a blog post quoting Chysotom demonstrating the proper distinction between Law and Gospel.

POST NOTE:
I was able to unearth the location of this painting: Mus
e des Augustins, Toulouse, France. The museum’s database entry for this painting dates it to 1872, not “1880s” as suggest by just about all other sources on the internet. Also, the title is indeed, “John Chrysostom and Aelia Eudoxia”

Below is the freetranslation.com translation (from French to English) of Mus
e des Augustins’ description of the painting:

Patriarche of Constantinople, capital of the empire of East, John, to that his oratorical talent had been worth the nickname of Chrysostome, continued to live as the simple monk that it had been even there. It criticized the driving of the empress Eudoxie, ambitious woman, that liked annalses and the pleasures, and favored the Arianism. Eudoxie did not have of stop succeeding in do it to exile, after persecuting it. But the death of the empress, arising shortly after, appeared as a divine punishment. John died in 407, leaving a considerable oratorical work, and was proclaimed Holy and Father of the church of East. The sources of which inspires itself John paul Laurens for this canvas are an appeared work in 1872, Narrative of the Roman history to the View century, holy John Chrysostome and the empress Eudoxie and The Christian corporation in East of Am
d
e Thierry, brother of the big Augustine Thierry, of which it had illustrated little time beforehand the Narratives of the Merovingian times. While the other personages listen and look at the preacher, the proud Eudoxie is figured standing, motionless and imperturbable facing the agitation of John Chrysostome. She does not favor it even any a look, and carries its eyes well beyond the personage that shouts at it since his pulpit. The composition of John paul Laurens, very contrasted, is based on a game of oblique opposites, and tallied as a photographic close-up that does not leave to appear the ground of the church. She opposes the abrasiveness of the saint haranguing the empress of his pulpit some drinks, and the luxury of the tribune where this one is held, impassive. The two personages, inserted in a centered composition around the stretched fist of John, translate a timeless vision of the clash of the Church and State. The relative modesty of the format, the counting of votes of the picture, centered around the stretched arm of John, the fingers irritating by anger, reinforce again the meaning of this clash.